Tracking Where, When and Why Sea Turtles Die 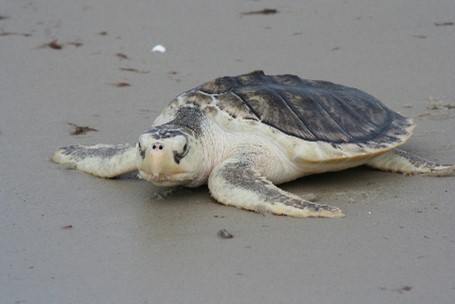 A Kemp's ridley sea turtle on a Texas beach. Credit: Kate Sampson, NOAA Fisheries
Five of the world's seven sea turtle species are found in the Gulf of Mexico, and all are classified as threatened or endangered by the U.S. Endangered Species Act. Additional concern for the future of these sea turtles followed the 2010 Deepwater Horizon oil spill when a spike in washed-up dead turtles, called strandings, was reported. Since then, researchers have been conducting the region's first comprehensive sea turtle study to better understand the dynamics that drive strandings. They seek to learn more about where stranded turtles died as well as the percentage of carcasses that strand instead of having other fates, such as decomposing or being scavenged by predators at sea.

Scientists with the Northern Gulf Institute and National Oceanic and Atmospheric Administration (NOAA) recently published results on a new Backtracking Analysis and Mortality Mapping (BAMM) model in Endangered Species Research that estimates the location where a stranded turtle died. They also published results of sea turtle field studies, one in Frontiers in Marine Science that revealed seasonal stranding patterns and another in Chelonian Conservation and Biology that documented carcass decomposition stages and their associated environmental conditions.

The very nature of living in the ocean lends itself to marine animals' death being cryptic; but, when they do wash ashore, it provides a learning opportunity. In the central northern Gulf of Mexico, the Kemp's ridley is the species most frequently found stranded along its coastlines, usually first encountered by the public who report sightings to the Sea Turtle Stranding and Salvage Network (STSSN).

"Sea turtle strandings are one of the few direct indicators of at-sea deaths," explained Research Fishery Biologist Melissa Cook with the NOAA Southeast Fisheries Science Center. "Data collected from stranded turtles provide critical information about cause of death and locations where threats occur and allows researchers to collect biological information and samples for numerous research studies." The threat location that Cook mentioned refers to the location of turtle mortality at sea as opposed to where it washed up on shore. Knowing the location where death occurred allows it to be linked with a potential cause or circumstance, which can assist resource managers in deciding what type of or if action is needed to protect these endangered species. The BAMM model is a tool that does just that, linking beached sea turtle carcasses to the approximate location of their at-sea death.

Here is a picture from a sea turtle field study. Kemp's ridley and green (floating here) sea turtle carcasses along with wooden effigies (orange and yellow objects) with satellite trackers attached were deployed in the Gulf of Mexico to help researchers learn more about turtle strandings. Credit: NOAA Fisheries
To estimate a stranded turtle's likely at-sea death location, researchers developed a formula for use in the BAMM model that predicts the rate at which a sea turtle carcass will float. Working backwards in time, the model simultaneously solves complex functions for the length of time that a carcass can drift after surfacing, its state of decomposition, seafloor depths encountered along the backtrack path, velocity of ocean currents, water temperature, and wind.

The team tested the accuracy of the model's estimated mortality locations by comparing its results with the drop locations used in a sea turtle drift study. In the study, researchers attached SPOT GPS satellite trackers to sea turtle carcasses and wooden effigy drifters that were dropped in Mississippi coastal and offshore waters over a year's period and tracked where they drifted. The backtracking model predicted the original deployment locations at sites within 10 km of shore with high probability, and its overall reliability was demonstrated in estimating the general area where sea turtles died. These results also indicate that reported strandings are likely biased toward sea turtles that die in shallower waters and closer to shore.

The drift study allowed researchers to estimate the percent of dead sea turtles that strand and their likely landing location on Mississippi and nearby beaches. About half (53%) of the deployed objects beached on shorelines. For the remaining deployed objects, 23% had an unknown fate, 21% had scavenged carcasses, and 3% had decomposed carcasses. For deployed objects that reached shore, nearly half (49%) landed on barrier islands, 28% on mainland beaches, and 23% in dense salt marshes where discovery is unlikely.

Seasonal stranding patterns were revealed by the drift study. The proportion of carcasses that beached mirrored the actual Mississippi seasonal trend in stranding numbers, with most strandings occurring in March through June, peaking in April. Then the number of strandings dropped as warmer summer conditions and changing wind conditions favored decomposition and scavenging. There was another small peak in November, likely the result of cooler conditions that are less conducive to decomposition.

Additionally, the drift study provided insights into the effectiveness of stranding detection and reporting via the STSSN. Of the total number of stranded objects, only 22% were reported, which was much lower than anticipated. However, as expected about half of the reported carcasses were those that stranded on beaches frequently visited and fewer reports of those stranded on offshore barrier islands (11%). These reporting numbers suggest a need for increased public awareness about the STSSN and for possibly conducting dedicated efforts to survey shorelines that are not visited as often as mainland beaches.

The second field study produced buoyancy and decomposition rates of sea turtle carcasses at varying depths and temperatures, which will further enhance the BAMM model as these are key factors that influence stranding calculations. In the study, researchers documented the buoyancy and decomposition of sea turtle carcasses inside cages that were submerged at various locations in federal waters south of Mississippi and Alabama. Each cage had a camera system and two carcasses with temperature-depth-orientation recorders attached.

The study showed that overall, carcasses did not float at deeper depths (> 30 m) and at lower temperatures (< 22°C) but tended to float sooner in shallower (≤ 20 m depth) and warmer waters (> 24°C). Also revealed was a tendency of green sea turtles to float to the surface more quickly than Kemp's ridley sea turtles due to different decomposition rates. These data enhance our understanding of the likelihood of carcasses washing ashore and can be incorporated into the backtracking analyses for improved estimates of mortality locations.

"Understanding sea turtle mortality in the Gulf of Mexico is critical to resource managers for sea turtle protection and conservation," said Cook. The backtracking model's estimation of at-sea death location combined with necropsy results from stranded turtles can assist managers, state agencies, and law enforcement during sea turtle stranding events, providing target areas for investigation of mortality causes such as bycatch in fisheries or the presence of biotoxins.

Looking ahead, Cook said that additional drift studies are planned for 2023 along with continued improvements to the backtracking model and use of the model to support stranding research. She noted that while the model is currently limited to the Gulf of Mexico, their methodology can be applied to other regions.

The Northern Gulf Institute is a NOAA Cooperative Institute comprised of six academic institutions located across the US Gulf Coast states that conduct research on the interconnections among Gulf of Mexico ecosystems (environments, habitats, resources, and people) and outreach for decisions based on these interconnections.