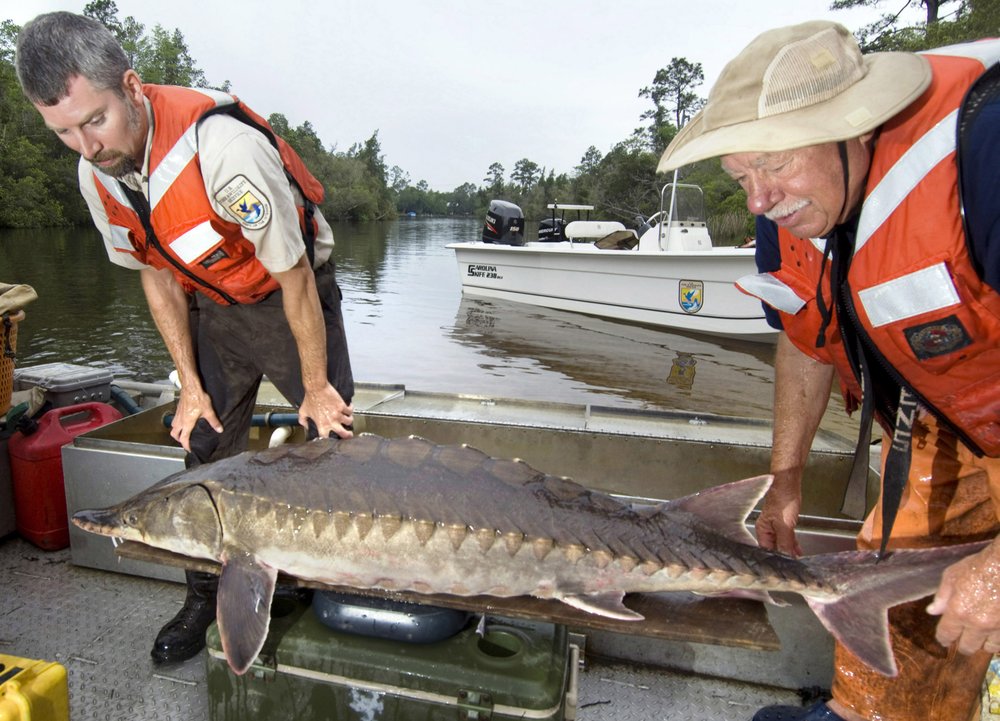 Scientists are beginning a study to find out, in part, whether creating oyster reefs in the fish's critical habitat in the Gulf of Mexico is bad or good for the fish.
Photo by Devon Ravine/Northwest Florida Daily News via Associated Press, File.
Scientists in the Army Corps of Engineers and the University of Southern Mississippi are looking at a possible way to improve artificial oyster reefs and how such reefs affect threatened Gulf sturgeon - big, toothless fish that nose out worms, shrimp and other food from the mud and sand in the Gulf of Mexico and nearby estuaries.

Gulf sturgeon are among nine sturgeon species and subspecies native to North America and among at least five listed as endangered or threatened.

People have been creating artificial reefs at least since the 1830s to attract fish for commercial catches and recreational anglers and to create hard surfaces where tiny, free-floating oyster larvae can latch on and grow to marketable size.

But because they cover some of the muck where Gulf sturgeon search for prey, artificial oyster reefs have been considered bad for the armored dinosaurs, said Read Hendon, director of the University of Southern Mississippi's Gulf Coast Research Laboratory.

That makes it difficult to get permits for such reefs in areas designated critical habitat for the fish, said Hendon, who is working on the three-year project with research ecologist Safra Altman and fisheries biologist Todd Slack, both of the Corps' Engineer Research and Development Center.

"Oyster reefs have been perceived as negative for Gulf sturgeon critical habitat. But is it perhaps the opposite?" Hendon said in an interview.

The edges of such reefs - like many areas where one type of habitat changes to another - can have a wider variety of inhabitants and sometimes greater numbers of those species. This might be an overall benefit to Gulf sturgeon, Hendon said. 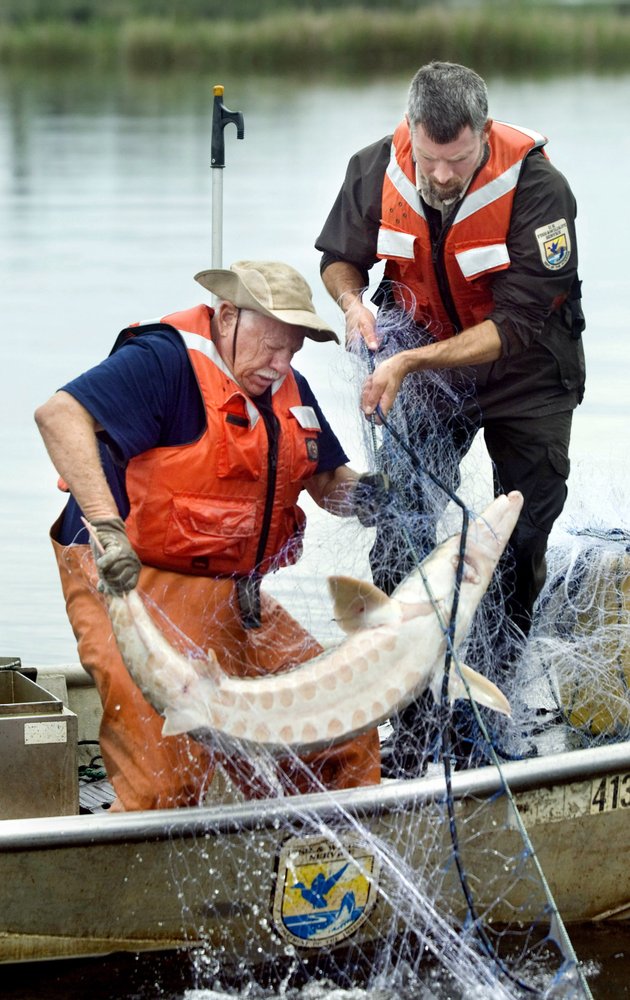 A study just getting underway will look at whether creating oyster reefs in the fish's critical habitat in the Gulf of Mexico is bad or good for the fish.
Photo by Devon Ravine/Northwest Florida Daily News via Associated Press, File.
"The hope is that increased productivity associated with the creation of the new reefs will improve nearby benthic invertebrate productivity, which will positively benefit Gulf sturgeon," Slack said in a news release.

In addition to about 1,730 miles (2,783 kilometers) of the rivers where Gulf sturgeon spawn, their critical habitat includes 2,333 square miles (6,042 square kilometers) of estuaries and ocean off of Florida, Alabama, Mississippi and in part of Louisiana's brackish Lake Pontchartrain and lakes linking it to the Mississippi Sound.

Another major thrust of the research is to find whether adding extra limestone at the start, middle or end of oyster spawning season helps establish the reefs and increase numbers of oysters and small creatures living just outside the reefs.

The researchers plan to create two squares of eight one-acre (0.40-hectare) plots of large limestone gravel, set out with an acre between each two plots. Each square will be in a different area, possibly one around Bay St. Louis and one around Biloxi Bay.

At each site, they hope to add gravel to two plots at a time in late spring, midsummer and early to late fall, leaving the other two plots alone.

Hendon said the study structured to be "not just a Mississippi study - this is something that could be widely used in the Gulf of Mexico and Southeastern United States."

The reef design can be replicated for research, and "We expect that the actual research results will also be applicable to estuarine systems in other states for coastal waters that have similar salinity regimes and other ecological characteristics," he said in an an email.

The researchers want at least one set in Gulf sturgeon critical habitat, he said.

That makes for a difficult balancing act. In the Bay St. Louis area, sturgeon critical habitat is south of the Bay St. Louis Bridge - one of the areas hit hardest when the Bonnet Carre Spillway was opened twice in 2019. Fresh water pouring out of Lake Pontchartrain killed huge numbers of oysters in the Mississippi Sound.

The spillway also was opened in 2020 and 2018, and two other times in the past decade. The 2019 floods were worst. But similar flooding in the next few years could wipe out half of the experiment.

"If it was easy, somebody would already have done it," Hendon said.