Summary
Even though many individuals receive tornado warning messages first through smartphone alerts, local television is still an important source to help individuals understand their personal risk from tornadoes. While there are several studies that have examined severe weather alerts and short messages through mass media, there is a lack of research available that focused on the content of local television broadcaster's warning coverages. This study attempts to fill gaps in our knowledge regarding the content of television broadcast coverage devoted to tornado warning communication by closely examining two local television news station's coverage of two separate events from 3 March 2020 and 19 April 2020. The two local television news stations are ABC-affiliate WKRN-TV (licensed to Nashville, TN) and dual CBS/CW+-affiliate WHLT (licensed to Hattiesburg, MS). Our analysis revealed that both stations heavily use radar products (e.g., velocity and reflectivity) although product use varies significantly between stations. For example, the WHLT-TV (for details, see figure 1) used a higher percentage of velocity products (56%) than WKRN-TV (34%). However, for reflectivity, WKRN-TV has a higher percentage (52%) than WHLT (23%). Both stations also differ in coverage scale. While the WHLT-TV had a higher percentage of city or county-level coverage, WKRN-TV had higher percentages of street-level coverage (see figure 2). In addition to visual components, we also found several differences in verbal content. The word cloud analysis (see figure 3) showed both similarities and differences between the coverage. For example, broadcasters in both WHTL-TV and WKRN-TV coverages frequently use words such as 'right now' 'warnings' and 'moving' to describe the path and direction of tornadoes. However, meteorological terms such 'rotation', 'debris', and 'radar', were more often used by WHLT broadcasters. The broadcast meteorologists in the Hattiesburg coverage more frequently used meteorological words such as 'lead time', 'mesocyclone', 'wind gust', 'shear' 'wall cloud', and categories ('ef3', 'ef4') compared to the Nashville coverage. The Hattiesburg broadcast meteorologist also used quantitative information such as the frequency of hazard events (i.e., 443 lighting strikes) to describe the severity of the situation. Finally, references such as "information from National Weather Service" (such as confirmed and expired tornado warnings) were more often used in the Hattiesburg tornado warning coverage. 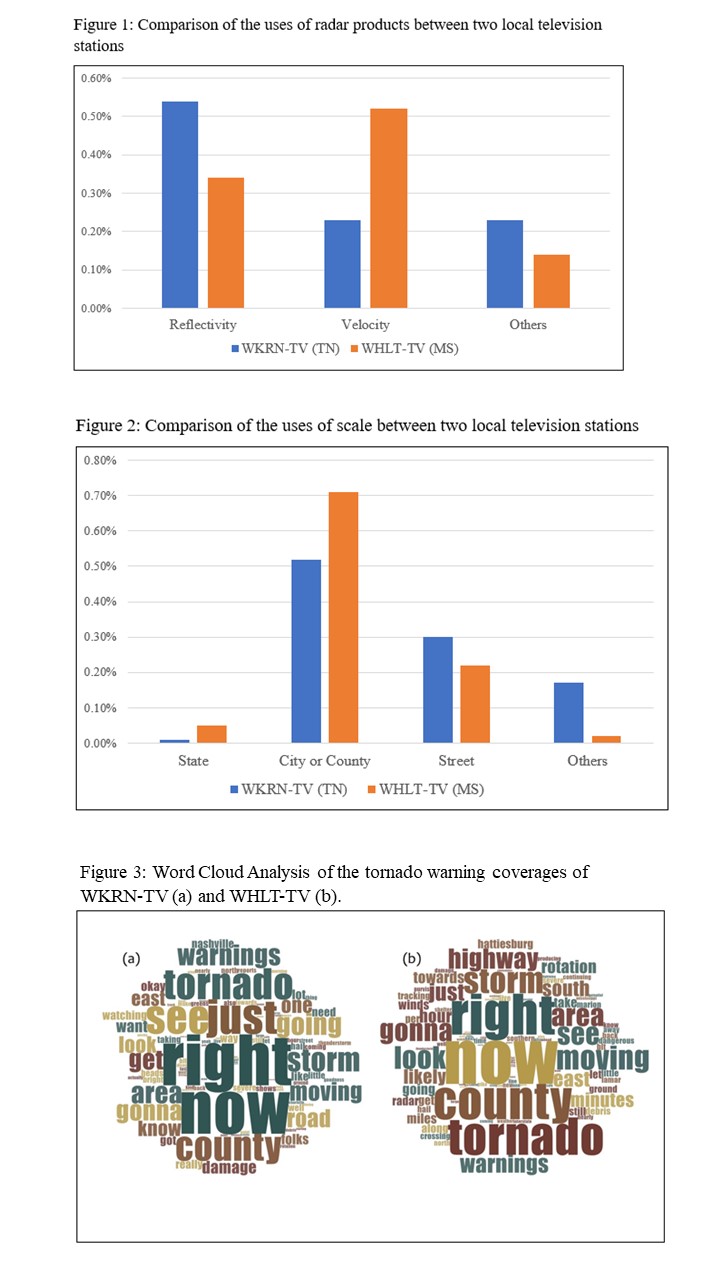