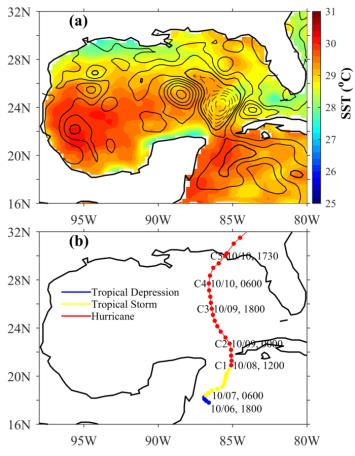 We investigate the impacts of one of the strongest recorded hurricanes to have hit the Florida Panhandle, Hurricane Michael (2018), on the upper ocean using a suite of satellite data, in-situ profiles, and outputs from the HYbrid Coordinate Ocean Model (HYCOM). Strong, low-level cyclonic winds associated with the hurricane generated strong Ekman suction that propagated ahead of the hurricane and caused changes in the surface and subsurface ocean. Following the passage of Hurricane Michael, a 3Ãƒ'Ã'Â°C drop in sea surface temperature (SST) was accompanied with a 4-5 mg m-3 increase in chlorophyll-a concentration. In the subsurface, a ~15 m mixed layer deepening preceded upward displacements of the isotherms and cooling of the mixed layer. The impact of hurricane conditions on sea surface salinity (SSS) was localized and influenced by competing processes, with upwelling of salty subsurface water increasing SSS and enhanced precipitation decreasing SSS. During the peak of the hurricane, the impact of upwelling was greater than that of enhanced precipitation and, thus, SSS increased. Further away from the upwelling centers, hurricane-influenced precipitation, and river runoff freshened SSS.